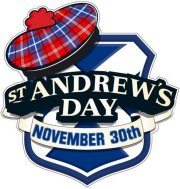 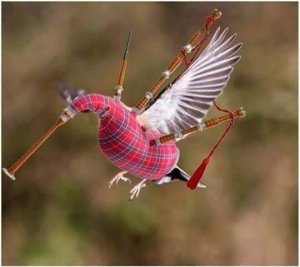 Each November 30 (the day of his crucifixion), we celebrate St Andrew,
Patron Saint of Scotland whose death on cross has inspired the Scottish flag :

Address To A Haggis
(Robert Burns)

Fair fa' your honest sonsie face
Great chieftain o' the puddin'-race!
Aboon them a' ye tak your place
Painch, tripe or thairm
Weel are ye worthy o' a grace
As lang's my arm
The groaning trencher there ye fill
Your hurdies like a distant hill
Your pin wad help to mend a mill
In time o' need
While... thro’ your pores the dews distil
Like amber bead
His knife see rustic Labour dight
An' cut you up wi' ready sleight
Trenching your gushing entrails bright
Like onie ditch
And then, O what a glorious sight
Warm-reekin’, rich!
Then horn for horn they stretch an strive
Deil tak the hindmost on they drive
Till a' their weel-swall'd kytes belyve
Are bent like drums
The auld Guidman, maist like to rive
Bethankit' hums
Is there that owre his French ragout
Or olio that wad staw a sow
Or fricassee wad mak her spew
Wi perfect scunner
Looks down wi’ sneering, scornfu’ view
On sic a dinner?
Poor de’il! See him owre his trash
As feckless as a wither'd rash
His spindle shank a guid whip-lash
His nieve a nit
Thro’ bloody flood or field to dash
O how unfit!
But mark, the Rustic, haggis-fed
The trembling earth resounds his tread
Clap in his walie nieve a blade
He'll mak it whissle
An’ legs an’ arms an’ heads will sned
Like taps o’ trissle

Ye Pow'rs, wha mak, mankind your care
And dish them out their bill o’ fare
Auld Scotland wants nae skinking ware
That jaups in luggies
But if ye wish, her gratefu’ prayer,
Gie her... a haggis!

Robert Burns (1759-1796) is one of the most famous Scottish poet : due to his outsanding work, he has highly contributed to the renew of Scottish identity. Besides his original creations, he has collected a hudge amount of traditional Scottish songs : this collection is a great gateway to a better understanding of old Scotland. A text like Scots Wha Hae (Robert Bruce’s March To Bannockburn) has been (and still is) also a great ally to the nationalist Scottish cause, by glorifying the victory of Scottish patriots against King Edouard’s troops (1314).
The famous Auld Lang Syne has become a new year’s anthem; if music and lyrics are actually older than Burns time, he has added two verses at this old song and has of course mainly contributed to the celebrity of this tune.
The first celebration as a tribute to this poet took place in 1801, by the anniversary day of his death (July 21). Later on, one has chosen to set the date of his birthday (January 25) to celebrate Rabbie Burns.


The main items of a Burns night (supper) are :
- Burns poems,
- Haggis,
- Whisky,
- the Scottish traditional outfit (kilt),
- and the piper


How’s a Burns night like?
- first, the Haggis arrival, presented by the top chef and introduced by the piper playing Brose And Butter or A Man’s A Man For A’ That : the haggis is swhon at each guests table; then, the piper, the head chef and the Master of Ceremony get a whisky before the later recites the Address to a Haggis and open the haggis with his dirk or sgian dubh,
- with the piper playing Farewell To Whisky, back to the restaurant kitchen to put the haggis on each plate,
- then the haggis is served accompanied by its neeps and tatties and also by a whisky,
- several toasts are proposed during the meal,
- endings with Auld Sang Syne.

What’s about this famous Haggis? Well, before becoming this fine recipe that can be savoured in many ways in Scotland throughout the year, the Haggis was (and still is) a wild animal, especially coming from Outer hebrids and particularly from the Isle of Lewis… Some pretend that the bagpipe was created to copy the call of this wild animal, to be sure to capture it… Whatever, if the existence of the wild haggis has been highly threatened by the Highland clearances, it has now recovered all of its vitality and prestige - such as a living Nessie - and is still the main guest of our Burns nights : so, if ye wish, her gratefu’ prayer, Gie her... a haggis! 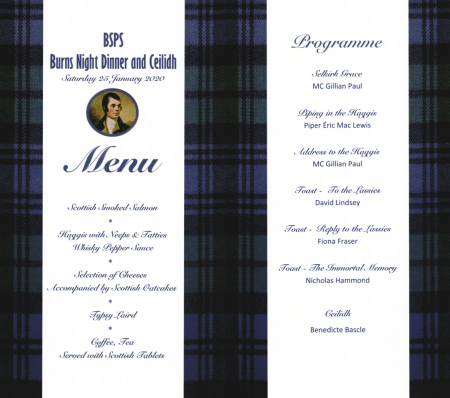