This is the current flag, made official by the Irish Constitution (1937).
About the three colours that are used :
- green is for the Catholic movement
- orange for the Protestant movement (House of Orange-Nassau)
- white as a symbol of peace between the two communities

The first public apparition of the flag took place in March 1848 during the "Young Irelander Rebellion". It was raised by a key figure of the movement, Thomas Francis Meagher.
As Ireland became an independant country, this flag replaced the famous Green Flag, although the later is still used.
This Green Flag exists since the 16th century at least, with the Brian Boru golden harp and a blue background; blue has been replaced during the 18th century by a green background, symbol of revolution and freedom :

Wales has been conquered by Edward I, King of England, in 1284; despite it, it has kept a strong Celtic identity, beginning with its language.

The Welsh dragon could be the one of King Cadwaladr, king of Gwynedd county during the 7th century; his banner represented a red dragon (like the one of the Arthurian legends as a symbol of the Bretons fighting against the white dragon of the Saxon invader) : it was adopted by Henry VII of England (who founded the Tudor dynasty) to remember the Welsh ancestry of this lineage.
The green and white colours are both the colours of the Tudor and those of the… leek, another Welsh symbol.

Scotland (Alba in Gaelic), as most of the Celtic lands, has no political independance, despite of the reopening of the Scottish Parliament in 1999. However, after the independance wars of late 13th century and early 14th, the country has been sovereign during a long time, sometimes with difficulties : this era ended with the Acts of Union (1707) and finally also with the failure of the Jacobite rebellions.
This been said, the Scottish flag is one of the oldest flags of the world, having its origins in the 9th century AD.
It displays a white saltire as a St.Andrew cross relevant to the martyrdom (on a diagonal cross) of the Apostle Andrew, Patron Saint of Scotland.
There's a legend telling us that this white saltire appeared on a blue sky on the day of a battle led by the Pictish king Oengus II against the Angles at the 9th century AD : the last were defeated and this cross became the basis of the flag.
The Scottish Parliament also decided in 1385 that the cross should be worn by the Scottish soldiers who were on duty in France.
The blue background took place later, to remind of the legendary blue sky (and also of the Auld Alliance with the French) and to distinguish itself from the red one of the English. You've noticed of course that this blue background is the background of my website.


That is the modern flag we're talking about : it has been created in the 20th century and called Gwenn Ha Du, meaning "White and Black" in Breton language.
Morvan Marchal did imagined it between 1923 and 1925 : it was used for the first time in 1925.
The flag is made of two parts :
- 9 horizontal black and white stripes
- a frame (at the top left) made of 11 ermine spots arranged in three rows.
If the ermines are the hallmark of the Dukes of Brittany, the horizontal stripes represent the different Breton countries :
a) 5 black stripes for Upper Brittany : Pays de Dol, Nantes, Rennes, St Brieuc, St Malo
b) 4 white stripes for Western Brittany : Cornouaille (French Cornwall), Léon, Trégor, Vannetais.
This presentation matches also with the Breton bishoprics.
After several decades of debates on the creator of this flag or on the flag itself, the Gwenn Ha Du is now widely recognized as symbol of Brittany.
He has replaced the flag of Ermines or also the Kroaz Du (Black Cross) known since the 15th century :


British Cornwall (Kernow in Cornish language) is rather less known than the others Celtic lands. The flag is pretty close to the old Breton flag (Kroaz Du) with a white cross on a black background. Located in the Southwest corner of Great Britain it is now an English county but always with a Celtic identity coming from the people of Cornobii.
This unofficial flag is known since the 19th century as St Piran's flag : he is Patron Saint of Cornwall and also of the workers of tin (historical resource of the peninsula).
The origins of this flag are rather blurred : nethertheless, it's possible that one wanted to highlight the bounds with Brittany (in France…) and its old flag.
The Cornish language is also pretty close to the Breton one and one can remember that most of the settlement of Brittany came from people of the Isle of Britain who were fleeing the invaders (Angles and Saxons).


Here is the most original flag of the Celtic world ; you might note a strange (and unexplained) relation with the flag of… Sicily! The Isle of Man is located in the Irish Sea, between the English, Scottish and Irish coasts. The country itself is a very old Celtic land that has been occupied by the Vikings (like Sicily…) than claimed by Scotland and England : one way to read this flag is to see a strong wish of independence expressed by the adage " Kick out England, kick out Scotland, and kick out Ireland " and the three feet that go with it…
One can also see a parallel with the famous triskell.
Anyway, this flag is one of the oldest flags of the Celtic nations (13th century).

It has been created mainly for the "Festival Interceltique of Lorient" as a summary of the six flags of the Celtic nations : Scotland, Ireland, Brittany, Wales, Cornwall and Isle Of Man.
A triskell takes place in the middle of it as an unifying symbol.
According to the different versions that exist for this flag, one can add one or two others flags representing Galicia and Asturias, two regular guests of the Festival.
Those two last nations are autonomous territories in Spain and claim of their Celtic heritage, particularly regarding their bagpipe playing traditions. 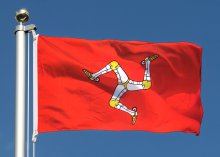