Wha will be a traitor knave?
Wha will fill a coward's grave?
Wha sae base as be a slave?
Let him turn and flee 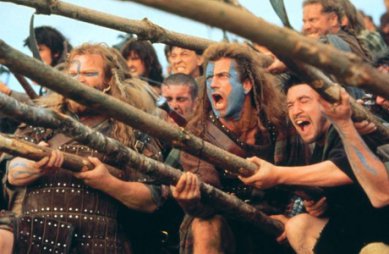 The lyrics, Robert Bruce's March To Bannockburn, were written by Robert Burns (1759-1796), the famous Scottish poet.
The text fits to an old Scottish tune, Hey Tuttie Tatie, that might have been sung by the Scottish army at the battle of Bannockburn (1314).
It also could have been a standard tune during the Jacobite risings (18th century) under the name of  Fill Up Your Bumpers High.
It has been considered as the Scottish anthem during a long time and is still used by the Scottish National Party.
The score is also known by Bruce's Address, referring - according to Robert Burns - to the address of Robert The Bruce (King of Scotland) to his army before Bannockburn.

Pipe-bands often play it as a march but I prefer follow the slower beat of the song and play each phrase only one time, as for the song. I also have added a fermata at the end of bars 3 and 7 to get an useful emphasis.
The first verse who gave the name to the song, Scots wha hae wi' Wallace bled - or Scots who have with Wallace bled - is about William Wallace, who's story has been told by the famous Braveheart movie (Mel Gibson-1995).

Scots Wha Hae has been also used by Hector Berlioz in his Rob Roy Overture composed in 1831 (see bellow) and in Max Bruch Scottish Fantasy in E flat major (1880).