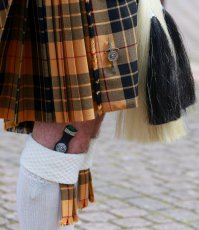 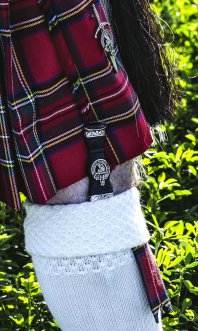 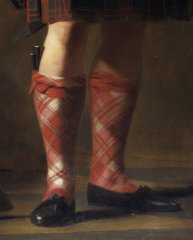 Before that, Highlanders weapons mainly consisted in the great sword called Claymore and in the dirk.
The sgian dubh itself could come from :

- an evolution of the sgian achlais (*) whose blade was bigger : already existing during the 17th century, it could be hidden in a jacket and pulled out by the sleeve if necessary… (*) achlais (Scot. Gael.) = armpit or arm
- an evolution of a simple hunting knife used to skin the game, then embedded in the traditional outfit.

The idea of hiding this weapon is illustrated by the word dubh meaning "black" but also "hidden"; it was common for a Highlander to drop his weapons at the front of the house where he has been invited, including the sgian achlais finally too big to remain hidden… That could be a good reason to invent the smaller sgian dubh.

We could also mention the consequences of the last Jacobite rebellion and those coming from the Dress Act (1746) : Highlanders were not supposed to have weapons anymore; so, rather than to give these weapons to the "Red Coats", they could have prefer to break the big blades of their swords and dirks and to make some easily hidden sgian dubh.
Thanks to Queen Victoria (1837-1901), this hidden knife was finally integrated to the Scottish outfit.

The first sgian dubh got a rounded handle made of antler or horn (so they were not particularly black but only hidden). Today, the handle is often flat at least for the side in contact with the leg. The holster and the knife are also often  embellished by a gem and the clan motto. 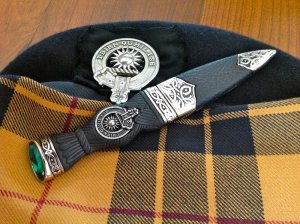 Here's a small part of the outfit, small but frequently drawing the attention of the audience : the sgian dubh (Scot. gael. meaning black knife; one pronounce it skee-ən-doo).
It's kept in the right or left hose and only the handle can be seen.
It's a small (4 inches at most) jagged blade that seems to date from the 18th century.
One of the first representation is a portrait of Colonel Alexander Ranaldson MacDonell (1812) in which you can see two sgian dubh put in the right sock :