- a leather bag (bigger than for the binioù),
- three stocks set in the bag to receive the pipes,
- a pied de veuze or chalumeau i.e. a chanter (melodic pipe), conical bore, longer than the binioù one; it is almost always decorated with splines at the bottom and gets a double reed,
- the drone (bourdon in French) made of a single pipe (sometimes two), which produces a single note (either in the chanter key or at the fifth),
- the blowpipe to inflate the bag.

Boxwood or Mozambican woods are used and those woods can still be decorated with zoomorphic figures (fantasy animals).

The Veuze has been recreated without audio recordings; choices had to be made :
- the acoustic power is now between the one of the smoother bagpipes from Center France and the Scottish bagpipe (or the binioù)
- the key is ranging from A to C, considering that the only ten old chanters that have been found were made in keys of B flat until C.

The Veuze like the binioù is a today's bagpipe, firmly established in the Celtic musical world.

… It is hard to get a clear answer as the leads are numerous.
To mention only two of them :

- there's a relation between the word veuze (sometimes written vèze or vèse) and the French vessie (Eng. bladder) : this organ - sometimes a pig's bladder - has been used for the bag of some bagpipes; but its dimensions are rather incompatible with the size of the Veuze.

- one can also find a similarity with the Breton word beuz which means boxwood, a material used for the making of the pipes. In Breton language and in certain contexts of the phrase, the letter « b » will become « v », so beuz will be written veuze. That last spelling will be chosen at the rebirth of the instrument.

It is also difficult to form one's opinion by searching the written material : at least until the 18th century we have lots of different words, particularly vèze and binioù that could name the same instrument… but certainly not the Breton binioù which was only created at the end of the 18th century : smaller than the veuze, the binioù - playing one octave above - took the Veuze place within the duet with bombard.

What are the different parts of the Veuze? 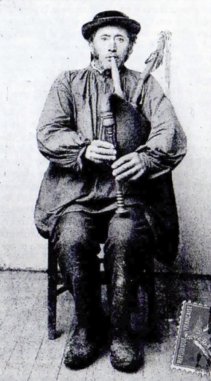 A bagpipe from Brittany and Vendee (France)

This is probably the nearest instrument to the bagpipes played in Continental Europe during the Middle Ages. Thereafter, as for the bombard, it was less and less played : by the 19th century the Veuze was only used in France in county of Nantes (Brittany) and in the one called « Marais Breton-Vendéen ».
Then in the 20th century, between the two world wars, the instrument has disappeared, replaced by the accordion or later by the Scottish bagpipe : the last player to be known died in 1948.
Dorig Le Voyer (1914-1987) - already mentioned in the bombard page - made the first modern Veuzes, using the researches led by Jean Villebrun.
This revival will be completed in the second part of 20th century particularly by Thierry Bertrand and the « Association des Sonneurs de Veuze » created in 1976.

But where does the name veuze come from? 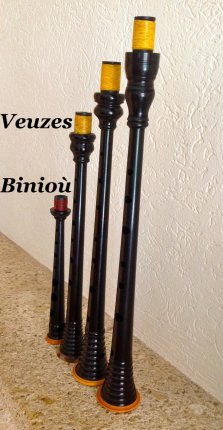