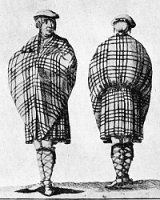 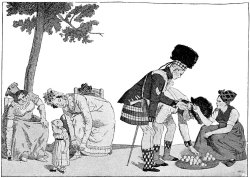 Kilt and Bagpipe are the two first words that come to mind in France when talking about Scottish culture and traditions.

Translated as féileadh in Scottish Gaelic, the word kilt could mean « to dress up » or « to fold clothes around the body » and could come from the Old Norse (like a lot of Gaelic words) kjalta, meaning « lap » (ed. note: it remind us of the kilt set close to the knees).
The kilt is linked with the tartan (breacan - Gael.) or plaid (plaide - Gael. = tartan blanket put on the shoulder).
Tartan clothes are thousands of years old and as for the bagpipes, common to several cultures. The oldest one to be known for the Celts is the one from Falkirk found in a jar with Roman coins : it dates from the 3rd century AD (see pic. above).
The tartan is now especially associated with the Scottish clan.

The 16th century seems to be one of the pivotal era for the kilt : at this time there was the belted plaid (féileadh-mór, breacan an féileadh - Gael.), sometimes called the Great Kilt. It was a big tartan cloth reaching the knees for men and the ankles for women, held at the waist by a belt. The plaid also covers the upper part of the body (see pic. above).
The first written record of the belt on the plaid comes from a Gaelic story by the Irish Lughaidh O'Cleirigh (Lewey O'Clery), Beatha Aodha Ruadh Uí Dhòmhnaill aka The Life of Red Hugh O'Donnell.
The author refers to Scottish mercenaries coming from the Hebrides by request of their « employer » O'Donnell in 1594.
The story makes it very clear that a belt (girdle) is placed at the waist and outside the « coat » (the latter is described as reaching the calves, colourful and trimmed with folds) : « … a mottled garment with numerous colours hanging in folds to the calf of the leg, with a girdle round the loins over the garment … ».

So at this era, the tartan was long enough to have wide folds and to be held by an external belt. The upper part of it could either be assembled on the left shoulder or cover the whole chest and even the head to shelter from the Scottish climate…
The length of the plaid is often exaggerated : one can sometimes read about a 16 yards (14,63m) length, perhaps more!
There is a misunderstanding - kept alive today - between the length of the material that is used and the length of the final cloth : as the weaving looms from this time could only deliver material of 25-30 inches wide, one had to sew two pieces of material to get the correct width of a kilt that is 50 to 60 inches. So a 8 yards kilt needed some 16 yards of cloth… but even like that, this length seems still overrated.
As a matter of fact, some military registers from the 18th century describe the belted plaid as reaching a still impressive 3,25 yards length…
(about the first belted plaids and the length of the great kilt, please read that great article released on the Scottish Tartans Authority website).
The colours of the tartan were dependent on what was available, on some kind of « fashion », also sometimes on the financial resources and not necessarily on the clan connection : even if that matter is highly debated, it seems that this link has been generalized during the 19th century and the kilt revival (see below).

And before? There are not many sources we can trust and the historical re-enactments like Braveheart (Mel Gibson's movie) prefer to play - effectively - the romantic card, even with Highlanders in great kilts in the heart of the Middle Ages…
So due to the lack of evidence before this 1594 event, it is likely that before the 16th century the tartan clothes were not long enough to be used as a great coat with wide pleats and an external belt (most important features of the belted plaid).
On the other hand, the few authors that have written about this matter all focus on the bright colours of the Celtic clothing. The Greek historian Diodorus of Sicily (1st century AD) describes « embroidered and colourful shirts worn on breeches ».

And after? At the beginning of the 18th century, the Scottish outfit has been completed by the Small Kilt, féileadh-beag in Gaelic simplified in philibeg : it is the short version of the belted plaid with only the bottom part (tartan under the belt).
This new garment could have been created by… a British national! Anyway, there are other sources that seem to establish that the small kilt was created by the Highlanders themselves during the previous century.
However, the philibeg is the modern kilt, often completed by a tartan cloth on the left shoulder (plaid, fly plaid or piper plaid for the longest version) that reminds us of the belted plaid (see pic above).

In this long and sometimes confused story, there is one event that could have marked the end of this garment.
The last Jacobite rebelion ended with an eradication program of the Highlander culture, including the famous Dress Act (1746) that prohibited the wearing of the kilt and of the tartan in its philibeg or belted plaid versions.
Fortunately, this situation did not last too long : the Dress Act has been abolished in 1782 and thanks to the Celtic revival of the 19th century and… to the English monarchy, the kilt became a trendy garment and a symbol of the Scottish nation.

1. before 16th century, no kilt but an use of the tartan with very colourful materials

2. between 16th and 18th century, the belted plaid or great kilt