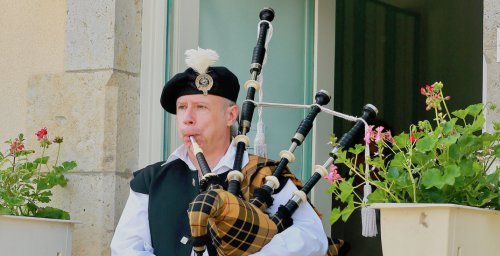 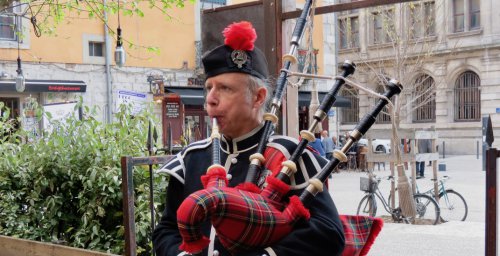 Several hats are part of the Scottish outfit, starting with three of them, often adorned by a cap badge with the motto of the clan or the regiment and by a feather :

The Tam O'Shanter (TOS)
It's a nickname that was given to the traditional Scottish bonnet at the end of the 19th century after a Burns' poem : it has got a tassel (torrie) and sometimes an external strip with a chequered pattern (diced). It was all blue in the beginning (Blue Bonnets).

The Balmoral (named after the castle of the same name, summer residence of British sovereigns) is a smaller version of the Tam O' Shanter : both of them exist in different colours, even in tartan, and were used by many regiments. Two ribbons are set in the back of the hat : Highlanders knot them while Lowlanders let them free. The white feather on the top reminds us of the Jacobite troops, faithful to Bonnie Prince.


The Glengarry is another version of the traditional hat : it has been introduced in the military outfit by Alexander Ranaldson MacDonell of Glengarry (18th century), probably after a preexisting hat. This cap can also be civilian or military.
It displays all the traditional props : torrie, ribbons, chequered pattern (diced Glengarry).


The Feather Bonnet
Feathers are the main constituent of this last cap, only used in the army : that is another evolution of the Tam O' Shanter, introduced by the Highlanders (18th century) with a decoration made of ostrich feathers. British regiments, particularly those who were in touch with Native American tribes, did amplify this trend by adopting a full feather cover set on a cage for a spectacular effect on the enemy.