Sing me a song of a lass that is gone
Say could that lass be I?
Merry of soul she sailed on a day
Over the sea to Skye

Sing me a song of a lass that is gone
Say could that lass be I?
Merry of soul she sailed on a day
Over the sea to Skye

Sing me a song of a lad that is gone
Say could that lad be I?
Merry of soul he sailed on a day
Over the sea to Skye

Mull was astern, Rùm on the port
Eigg on the starboard bow
Glory of youth glowed in his soul
Where is that glory now?

Speed Bonnie boat like a bird on the wing
Onward! The sailors cry
Carry the lad that's born to be King
Over the sea to Skye

Loud the wind howls, loud the waves roar
Thunderclouds rend the air
Baffled our foes stand on the shore
Follow they will not dare

Many's the lad fought on that day
Well the Claymore did wield
When the night came, silently lay
Dead on Culloden field

Though the waves leap, soft will ye sleep
Ocean's a royal bed
Rocked in the deep, Flora will keep
Watch by your weary head

Burned are their homes, exile and death
Scatter the loyal men
Yet ere the sword cool in the sheath
Charlie will come again

Traditional Scottish song recalling the escape of Prince Charles Edward Stuart aka Bonnie Prince Charlie from Uist to the Isle of Skye after the battle of Culloden (1746).
The original song is a rowing song collected and arranged by Miss Ann Campbelle MacLeod (Lady Wilson), Cuthag nan Craobh (The Cuckoo in the Groove).
In 1884, Sir Harold Boulton put other words to the tune, introducing the character of Bonnie Prince Charlie.
Other lyrics were written afterwards, like those from Robert Louis Stevenson’ poem.

The tune is often played as a lullaby by folk bands and as a Slow Air or Slow March (pipebands) with the bagpipe. (*)
The Skye Boat Song is also the common thread of Outlander, a British-American series, broadcasted since 2014, that is an outstanding reconstruction of Scotland during the 18th century and of the last Jacobite rising.
The song follows Stevenson's lyrics except for the chorus, slightly rewritten by Bear McCreary with « Sing me a song of a lass that is gone... » instead of Sing me a song of a lad that is gone...
If the series includes many tunes very well played - but unfortunately non identified - on the Highland bagpipe, I regret anyway that music is only credited to Bear McCreary without mentionning the Scottish traditional origin of the main theme : it is a lack of elegance for a series supposed to promote the Scottish culture!


(*) I've removed some grace notes played by pipebands and mostly based the score on The Corries version. 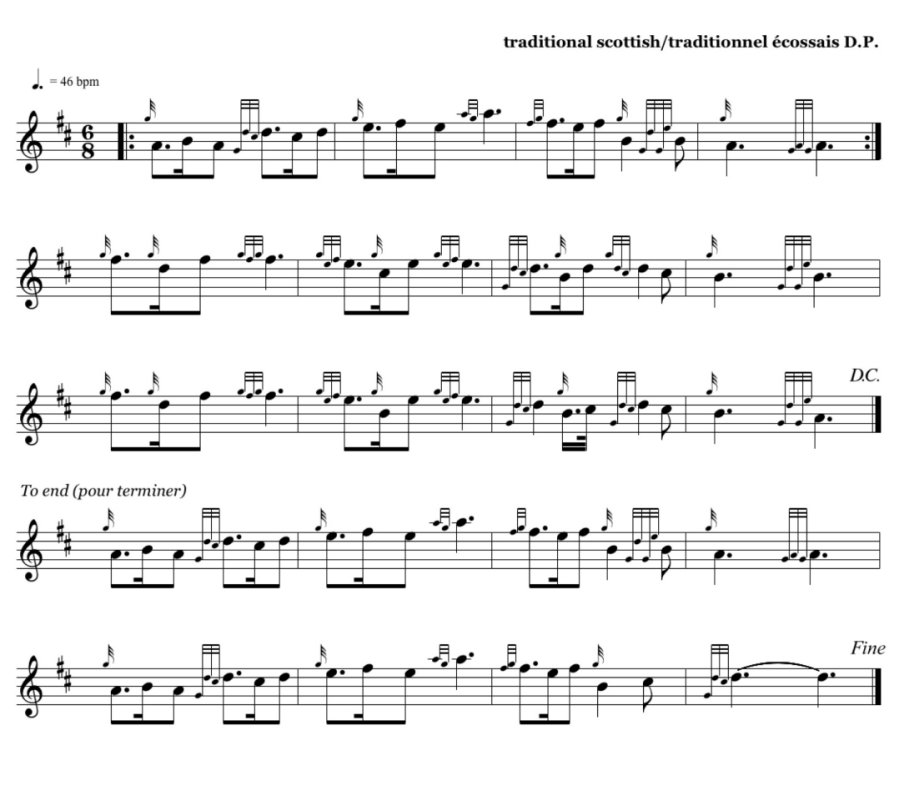