The Great Highland Bagpipe in the 21st century

A piper for your event (Scots Wha Hae) 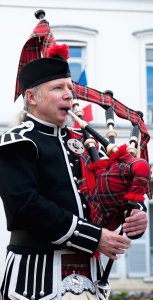 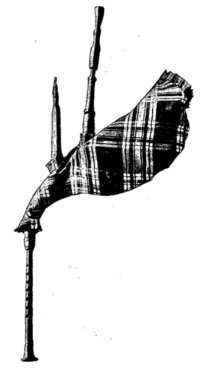 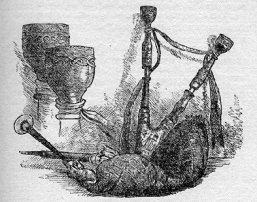 Description of the actual instrument :

- a bag in skin or synthetic (or a blend of the two materials),
- a cover-bag in the tartan colour of the clan,
- five stocks on the bag for : the blowpipe allowing to inflate the bag, the chanter for the melody, the three drones playing the basic chanter note (B flat); those pipes and stocks made in ebony most of the time,
- the reeds, set in the pipes and vibrating with the air of the bag, are natural for the chanter (double reed - see pic) and often in synthetic materials (or a blend natural-synthetic) for every drone single reed.

All the piper's art lies in finding and maintaining an air pressure balance between all of those components, to get a right and steady sound, giving the instrument all of its majesty. It is all about a careful selection of reeds, a regular maintenance of the bagpipe and a lot of personal work, to enjoy your playing skills.

I play a McCallum bagpipe, with a MacLeod Of Lewis coverbag or sometimes a Royal Stewart one; that tartan comes from the Royal House of Scotland in the line of the Steward of Dol of Brittany and Scotland (12th century title).

Symbol of Celtic cultures, iconic instrument of the Highlanders, the bagpipe singularity and power have almost led that instrument to conquer the globe, by means of an historical paradox : prohibited in the 18th century after the last Jacobite rebellion, it was later adopted by the British army, which then contributed to spread the Great Highland Bagpipe almost all other the world...

The bagpipes played in Scotland will experience an original evolution that will make them different from the others.
They were initially fitted with a single drone tenor - like others European bagpipes - playing an octave lower than the chanter, as we can see on « The Bannockburn Bagpipe of Menzies » (see pic bellow), that could have been played at Bannockburn (1314).
It began to single out likely from the fourteenth-fifteenth centuries by adopting a second drone tenor, as on the bagpipe kept at the Museum of Edinburgh, dated 1409 (see pic bellow).
In the seventeenth century, a bass drone (the largest pipe) was added, playing two octaves below the chanter, giving the bagpipe its actual structure.
It is a diatonic instrument (like most of the Celtic ones) with a scale built under an unequal temperament, tuned in a B flat key (Scottish A).

The Great Highland Bagpipe, emblematic instrument of the Highlands, was introduced in Brittany at the end of the 19th century and later on adopted by the bagadoù (after WWII) to replace their binioù bras (great bagpipe).

A bit of history

The origins of the bagpipe are lost in a past shared between many cultures across the world. It seems logical to think that the principle that led to the bagpipe creation (searching for a continuous sound) appears almost everywhere in the world, at least by request of dancers of all times.
The ascaule, an instrument known since the ancient Greece era and coming from Syria or Babylon, is already a true bagpipe with its bag and its pipes (see pic) :

Some say that the bagpipe was introduced in Scotland at the time of the Roman invasion and occupation of the British Isles; it is also likely that it has been invented in the Celtic world, if not by earlier people.
Some remains dated from prehistory and looking like a set of drones were recently discovered in Ireland (Wicklow) : they date from the third millennium BC, so before the beginning of the Celtic era (see pic) :

Recent studies (2016) on human remains, founded near the current Belfast and dated 3200 BC, have revealed a genom that contains 60% of genes from populations who lived in the Near East. Those people brought agriculture by immigrating to « Ireland » and they certainly came with their musical instruments; so the bagpipe could have come from this area of the world or it could also have merged with the local one.
There is still much that is unknown - while other things will certainly remain forgotten - before we get an agreement on the bagpipe origins at least in the Celtic world.

Anyway, if the materials that are used and the general shape of the instrument differ depending on the country, the principle is still the same : a skin bag attached to some wooden pipes to replace the cheeks of the player as a reserve of air.
The five pipes of the current Scottish bagpipe are : (1) the blowpipe, to inflate the bag (2) the chanter, to play the tune (3) the three drones, set on the musician left shoulder for an harmonic accompaniment.
The chanter (melodic pipe) and the drones produce their sound using the reeds, natural or synthetic, single or double, that vibrate with the air put under pressure and flowing out of the bag. 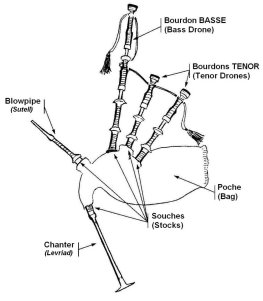 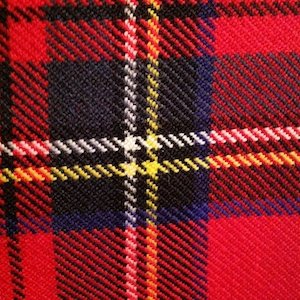