Bellows are fastened to the chest and activated by the elbow to put air into the bag. The other elbow is used to stabilize the pression inside the bag. With no more blowing needed, the piper can sing or talk with the audience.

This set comes from Nigel Richard.
It has one bass drone and two tenors, all tuned in A and a drone switch to allow playing in other keys, due to the chromatic chanter : 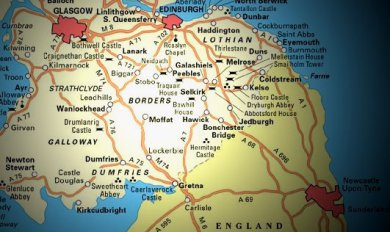 Border Pipes were played on both sides of the border, in the Borders and in the Northumberland, with the same repertoire.

They had almost disappeared in the late twentieth century, when musicians and pipe makers chose to play it again.

The bagpipe is historically tuned in A but the chanter is often chromatic (all tones and semitones available on the chanter scale).

Scottish bagpipe from the Borders (part of the Lowlands, Southern Uplands, between Edinburgh and England), known since at least the sixteenth century. There are two versions :

The oldest one with :
- a blowpipe (see picture) to inflate the bag,
- three drones like the Great Highland Bagpipe with a bass and two tenors or with a bass, a tenor and a fifth, always set on the same stock,


- a conical bore chanter (melodic pipe) which allows the Border Pipe to be more powerful than the other "smal"l bagpipe from Scotland, the small pipe, but definitely sweeter than the Great Highland Bagpipe. It also plays an octave above the small pipe, in the register of the fiddle. 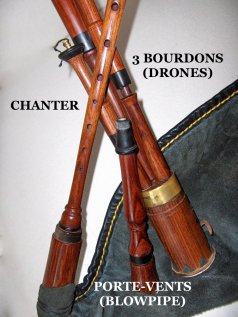 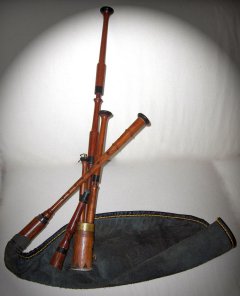