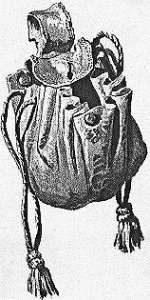 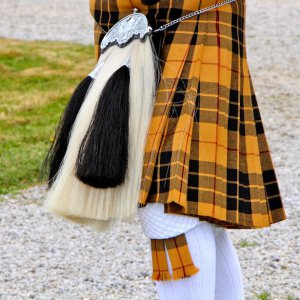 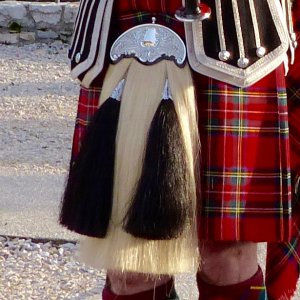 Looking for some pocket in your kilt, you surely won't find one… the sporan is there to overcome this lack.
By the way, an English translation could be purse or wallet.
Two spellings can be used : you will often read sporran but I generally prefer the Gaelic spelling sporan with only one "r".

At the beginning, it was a small skin bag or pocket (sometimes a fur bag), simply tied to the kilt belt with a leather link. It was used to keep lead bullets or coins.
Thereafter, the sporan will move from the kilt belt and will be directly fastened to the kilt through its own chain.
Prominently displayed in front of the kilt, it will single out through the materials that are used and its decorations.

The sporan exists in many versions, from the « working sporran » (kind of daily sporan) to the « dressed sporran » for receptions.

A new sporan emerged at the end of the 19th century : the sporan molach or (horse) hair sporran, also known as the piper-sporran : three names for the sporan biggest version.
The leather pouch can't be seen because it is fully covered by an horsehair fleece. By the way, the whole sporan hides a big part of the front part of  the kilt.
This piper sporan is only worn by the pipers dressed in a military outfit.