The Battle Of Sherramuir
- The Corries version -
(Robert Burns)

O cam ye here the fight to shun
Or herd the sheep wi' me, man?
Or were ye at the Sherra-moor
Or did the battle see, man?
I saw the battle sair and teugh
And reekin-red ran mony a sheugh
My heart for fear gaed sough for sough
To hear the thuds and see the cluds
O' clans frae woods in tartan duds
Wha glaum'd at kingdoms three, man
La, la, la, la, …

The red-coat lads wi' black cockauds
To meet them were na slaw, man
They rush'd and push'd and blude outgush'd
And mony a bouk did fa', man
The great Argyle led on his files
I wat they glanced for twenty miles
They hough'd the clans like nine-pin kyles
They hack'd and hash’d while braid-swords clash'd
And thro' they dash’d and hew'd and smash'd
Till fey men died awa, man
La, la, la, la, …

Had ye seen the philibegs
Wi’ skyrin tartan trews, man
When in the teeth they dar'd our Whigs
And covenant True-blues, man
In lines extended lang and large
When baiginets o'erpower'd the targe
And thousands hasten'd tae the charge
Wi' Hieland wrath they frae the sheath
Drew blades o' death till out o' breath
They fled like frighted dows, man
La, la, la, la, …

They've lost some gallant gentlemen
Amang the Hieland clans, man
I fear my Lord Panmure is slain
Or in his en’mies’ hands, man
Wad ye sing this double flight
Some fell for wrang and some for right
Mony bade the world gude-night
Say pell and mell wi’ muskets’ knell
Tories fell and Whigs to hell
Flew off in frighted bands, man
La, la, la, la, …

The original Gaelic tune, Gàbhaidh Sinn An Rathad Mór, is said to have been composed by a piper from the MacIains (MacDonalds) of Glencoe.
One can find it under the names of We Will Take The High Road and The Stewart's March; it is under this name that it could have been played by the Stewart's pipers at the battle of Sheriffmuir in 1715 (Jacobite rising) and at the battle of Pinkie in 1547 (known as The Black Saturday in Scotland).

The original lyrics don't seem to exist in English, so I've chosen Robert Burn's poem The Battle Of Sherramuir, in a version sung by The Corries but with another melody.

The High Road To Gairloch 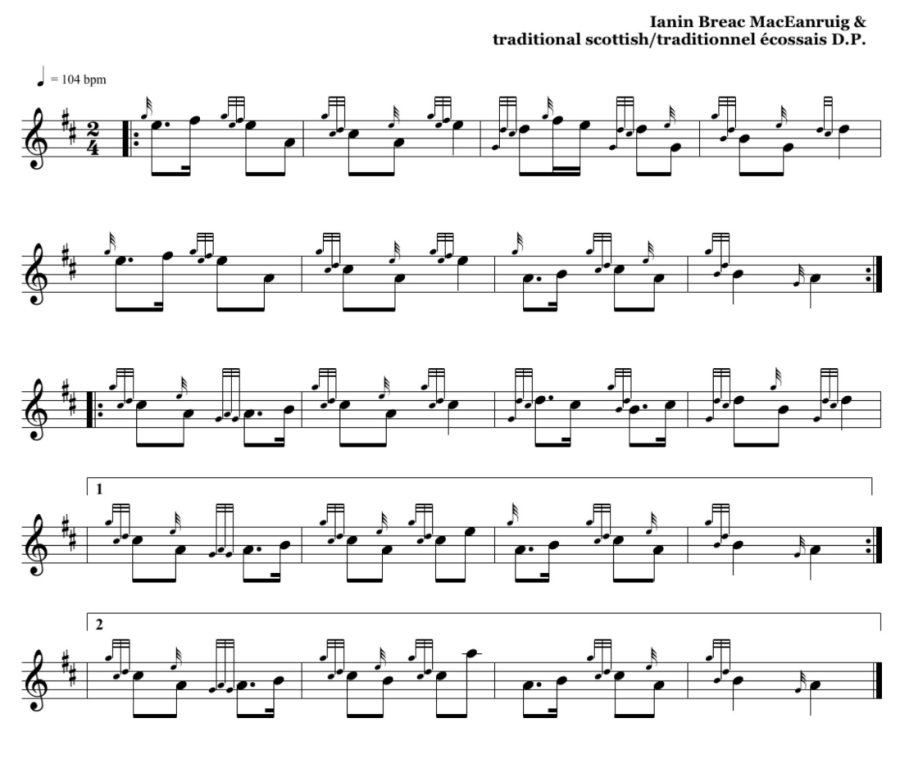