It's not far, just close by
Jesus is the door
Work all done, laid aside
Fear and grief no more
Friends are there, waiting now
He is waiting too
See His smile, see His hand
He will lead me through

Morning star lights the way
Restless dream all done
Shadows gone, break of day
Life has just begun
Every tear wiped away
Pain and sickness gone
Wide awake there with Him
Peace goes on and on

1. Antonín Dvořák
2. more about the lyrics

Classical music has often been inspired by the traditional repertoires : it is quite the opposite for this tune that was adapted for Scottish bagpipe from the second Movement of Dvořák's New World Symphony (1893).
It is not the only example in the repertoire for Highland bagpipe : you may also have a look at The Green Hills Of Tyrol, adapted from Rossini's operas.

Some lyrics were written by Dvořák's pupil, William Arms Fisher : they gave the name to the bagpipe tune. This one is often played at funerals but as it is close to the famous Amazing Grace because of words full of hope and light, I've put it among the Slow Airs.

Regarding the score I've written, I've tried to stay close to Dvořák's original, but it needs some compromise for the bagpipe that could displease the specialists… For example, the G (Scottish writing) in the antepenultimate bar (part 2) would be better if noted and played with a sharp, giving the sound of a natural A.
You may also find some alternative bagpipe versions on the internet, with different notes and structures that sometimes are not so close from the original air.
However, it is a wonderful melody that speaks for universality of music.

One can remember that Neil Armstrong did listen to this symphony during the Apollo 11 mission, that will lead him for a first walk on the Moon… Some kind of a New World too… 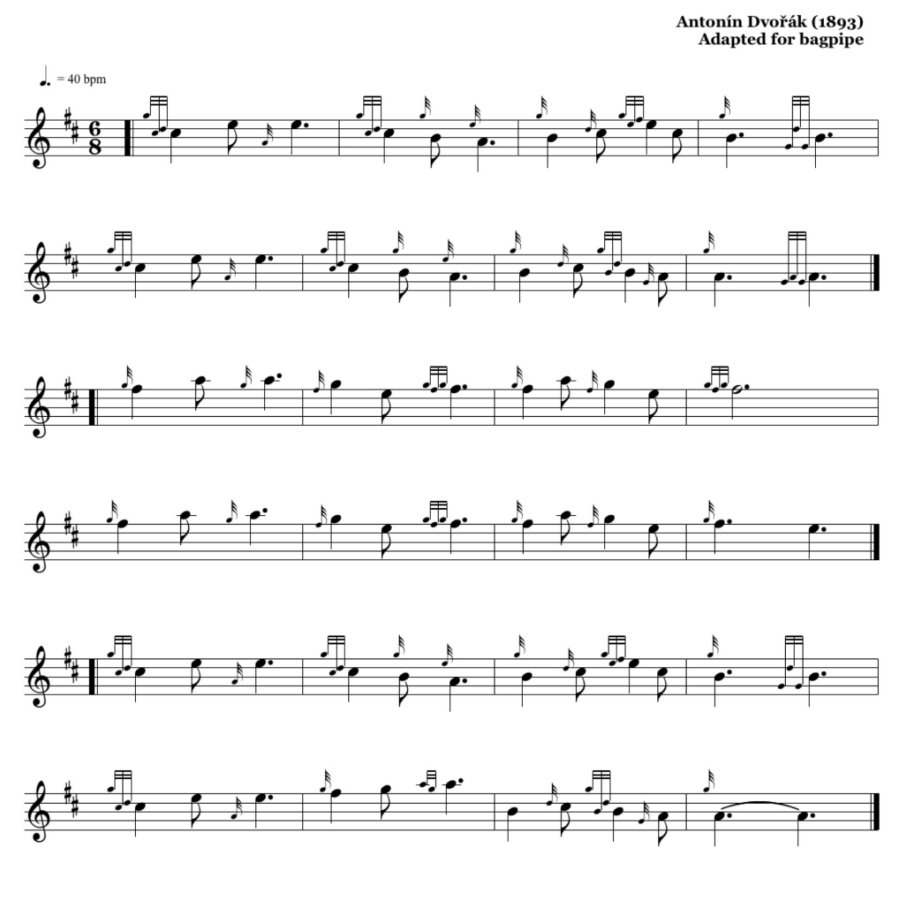