What happens when a fretless bass meets some bagpipes?
That is the main proposal of this record.

So we got some great tracks here (1-4-8 and the amazing number 5) that sound like an outstanding fusion work.
But some other tunes are less interesting either because there is no bass guitar (on two tracks!) or because of the weakness of the arrangements or the monotony of the theme.

There are also a few tracks of piobaireachd (pibroch or classical music for bagpipe) : those are particularly good like Port Urlar marvelously arranged : it is actually a great way to introduce the difficult art of pibroch.

The mix is quite uneven, especially between Highland bagpipe and bass guitar : the duet suffers from a lack of coherence in the sound space making the bass guitar sound sometimes like a false lead instrument.

On the other hand, the binioù, that appears on a few tracks, merges exceptionally well with the guitar : the Breton bagpipe is perfectly tuned and got a drone well balanced with the chanter and sounding sometimes louder than the Scottish ones! (that is in fact not realistic for them…).

So, with a better mix and also some tracks built with more than a single melody (even if it is some kind of a standard in traditional music, it can be rather boring…), we might get an outstanding record.
Despite of that and of the passing years, « To The Bobs » dedicated to the masters of piobaireachd Robert Brown & Robert Nicol remains a good album we can appreciate like a good old single malt…

- Piper's Dream - Fred Morrison (track 1) for the sound of the fretless bass and the virtuosity of the bagpipe on the second reel,

- Gaelic Air (track 4) for its amazing intro with a solo bass perfectly tuned,

- Port-Urlar (track 8) for its creative pibroch with an unexpected bass guitar and its superb riff, a smart electro background and again a good mix.

No video found here so it's up to you to buy this record : as I bought one myself, I've put the track 4 in headline… 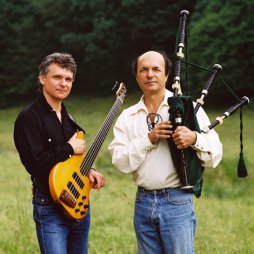 I met Fred Morrison during the summer 2014 in Brittany, country that he likes almost as much as his father's homeland located in the Scottish Hebrids.
It was for me a decisive encounter like that of Titi le Digabel regarding Breton music.
But no bombard or binioù here, we're talking about Scottish bagpipes and Fred is a world-renowned master of them.

This album logically focuses on his charism with all the instruments he plays.
That is the biggest quality of this production but also its biggest weakness : the arrangements are minimalist and the other musicians - except for the banjo - are mostly overshadowed.
All the tunes penned by Morrison are truely amazing and could have been better highlighted with some answers to the lead by other instruments, especially as there is no vocals on this opus.

Apart from that, the latter reserves a real surprise due to the almost total absence of the Great Highland Bagpipe.
It is true that playing this bagpipe in a band is often a challenge because of the tonality and the power of the instrument but we could have appreciate a bit more of Scotland and less of Wild West (!) : actually the main colour of this album sends us to the American West, due to the melodies, the playing and the instruments that are used (banjo, fiddle).
We can also hear a bodhrán on many tracks and that could have increase the Celtic colour but it is often too far in the mix.

On the other hand, we've got an amazing Reelpipe and also a lot of low whistle playing : those two are the best surprises of the record; the tracks with whistles particularly, on fast or slow beats, are some of the highlights here.

For all this and the inspired compositions, the outstanding skills of the lead, etc., this album is worth listening to!

- Train Journey North (track 1), with an energetic start and almost the only track with Highland bagpipe,

- Outlands (track 6), a great hornpipe with banjo and Reelpipe,

- The Hard Drive (track 10), with its amazing and increasing energy and its outstanding play on Reelpipe and banjo,

- last but not least, Nameless (track 5), played on low whistle only, without any audio effects, just Fred marvelously playing… 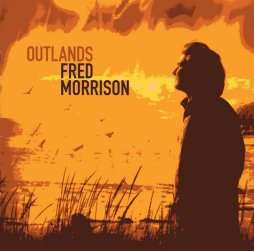