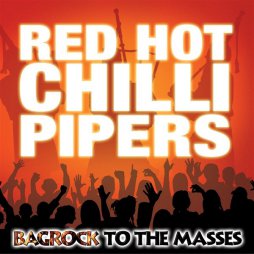 The band has been formed in Scotland in 2002. Their name is of course a play on the American band The Red Hot Chili Peppers. Their website goes on into parody with their welcoming statement : …THE MOST FAMOUS BAGPIPE BAND ON THE PLANET - EVER!… looks like another hint of another band, up to you to guess…
Let's go back to music. On one side, a rhythmic section with also guitars and keyboards, on the other, from one to three pipers (Highland bagpipes) and snare drum players. The result is a convincing sound that respects the identity of the two styles, rock and Celtic.
With several studio and live albums including many covers of international hits, the success of The RHCP has led them to tour many times abroad.

This album dedicated to the bagrock sound (a mix of bagpipes and rock) is their second opus; some of the sixteen tracks are also live ones. This number of tracks is the main weakness of the album…
Some of them could be removed because of a mix that could be greatly improved, minimalist arrangements and a tasteless rhythmic section. By the way, the cover of Flower Of Scotland is again of a poor quality, with its heavy drums and a dull lead vocal (luckily it will be the only attempt in this record) : The Corries are not replaced yet…
The drums are often too loud : perhaps it is because the bagpipes continue to scare many of the sound engineers… but the result is not convincing with other instruments playing at an excessive and non-natural output level…
This been said, the other (numerous) tracks are great ones; if the covers like We Will Rock You, Smoke On The Water, etc. are here « for the record », many other themes (including traditional ones) got an amazing interpretation by pipers and other musicians. We don't get bored here and we can feel lots of emotions by listening to this musical trip.
Rock and Celtic musics merge very well so…  Enjoy!

- The Chilli Time! - You're The Voice (track 2) : drums with a mix coming right from the Eighties (sigh)… some unexpected Celtic voices as choirs, and then the pipes with a nice theme that makes us forget that nasty sound of the drums; fortunately, Gaelic voices go on and the lead bagpipe plays at its top with a great rock theme; a nice cross fade with the voices brings the third sequence in a big finale with snare drums,

- Jazz Badger (track 5) : a great introducing riff on keyboards and dispite of drums with an agressive snare drum; then the pipe joins the groove in a nice way; superb tune with the keyboard that answers to the bagpipe : perfect from the beginning to the end,

- The Dark Island (track 10) : keyboard for intro, with subtil electro background on the hudge bagpipe theme; after a short break, the bagpipe comes again with a slight beat and Gaelic choirs until the end; the whole thing is a bit too linear but is a splendid moment of peace in the album,

- Hey Jude - The Mason's Apron (track 11) : here's a cover (from The Beatles)! Some Celtic rock at its best with a nice switch betweeen the two tunes during the track; great chorus on keyboard and an amazing finale with great choirs, pipes and organ (that last being the star of this track),

- The Hills Of Argyll (track 13) : live for once; keyboard and bagpipe in a clear sound, nice mix and a great melody to discover on the site; guitar break in the same relaxed mood and a nice sound for the drums; the second break is an amazing guitar chorus dubbed by the pipe; finale with pipes and snare drums; a great track with increasing emotions.

The vids on this page are from live concerts and may show some differences in the arrangements, the ways of playing and the mix in comparison with the album. 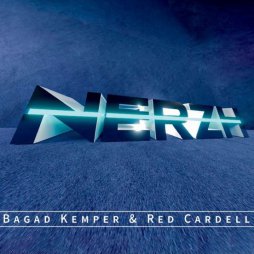 Red Cardell has begun its story in 1992 : to speak about its musical style means to go through rock, traditional Breton music, blues, French music, folk music, punk, electro, world, etc. Actually the band is - besides the style driven by the strong personality of the lead singer, Jean-Pierre Riou - mainly interested in musical blendings.
Its work with the Breton bagad of Quimper is not the first attempt they've made in this direction : this album marks in fact the 70th anniversary of the bagad created in 1949.
So here is an album rather compact (only 8 tracks) and homogenous, built around the tunes penned by the bagad.
The biggest surprise comes from the lack of lead vocal, most of the time replaced by instrumental parts or a spoken voice : actually we miss the strong vocal presence of Red Cardell's lead to fully appreciate this opus.
Rock music is often missing here and even if we can understand it for an album rather dedicated to the bagad, a bit more of Red Cardell and less of traditional influences could have been appreciated!
However, talking about the bagad, what a wonderful demo of their know-how, especially the bombards but also bagpipes and snare drums!

- Un Grain (track 3) : a tune directly inspired by Alan Stivell and his famous Pop Plinn coming right from the seventies… JP Riou's voice displays more rock accents than in the other tracks; a real hit to come due to the groove and of course the timeless theme; great final by the bagad,

- Un Nouveau Monde (track 5) : back to the introspective moods of the album Rock'N'Roll Comedy (2000) before the bagpipes take the theme with also some low bombards; nice groove with a great bass guitar and amazing bagad melodies. We finally forget the message of the lyrics but here is a nice blending between the two bands; we just miss a final with more rock energy that would have come from Red Cardell and the return of the lead vocal,

- Au Milieu De Nulle Part (track 6) : it begins like a blues in a nice duet led by an amazing bombard; outstanding groove between bass, guitar and bombard. And then a false end followed by a Gavotte theme (Breton dance); and then the vocals alternating with the instrumental gavotte. The groove remains very strong all along this rock gavotte illustrated by a rhythmic section that defines very well Red Cardell's sound : rock tunes that can be danced like traditional Breton dances.